WORNINGTON TREES
Search
​This is the 2009 tree plan produced by Catalyst Housing and submitted during all of their planning applications until 2020. The plan stated that 167 mostly mature trees would be cut down and only replaced by 72. The information it contains does not accurately represent the subsequent development and so is not a planning document that has been consulted on with residents.

A 1000 strong petition was handed into RBKC in Dec 2020 calling on the council to stop the felling of 42 trees during Phase 2B of the regeneration and for Catalyst to consult with residents. An Overview and Scrutiny Committee Meeting was held in which Cllr. Marie-Therese Rossi, Chair of the Committee, made the following recommendation to Catalyst:

"To sum up, I have something to say to Catalyst. Something has gone very badly wrong here. You've got a planning permission, which by the sound of it, you got by the skin of your teeth, 10 years ago. You have not been engaging with the residents. And something I learnt a long time ago. I used to work with the urban regeneration agency and rule number 1 for regeneration is that you don't impose it. It's got to be bottom up. You have got to take people with you. And it really seems in this instance that that is not happening."

"So I would urge you Catalyst to go and look at your plans again and just see by building a few less houses or flats that you can actually save some of those trees. Because that is what the residents want. And as they have said they are the ones who have to live there for years to come. And Catalyst cannot just dump a project on residents and expect them to be happy about it because they would like to keep their trees. My sympathies are with the residents. I would urge you Catalyst to look again, because it can't be right, this level of protest against what you are doing and that you have not engaged with people down the years."

​As a result of community pressure, Catalyst Housing had agreed to save 2 mature trees that were set to be removed and to move three trees to the nearby Athlone Gardens. They also agreed to plant 14 more trees than was originally planned in Phase 2B and these will be semi-mature London Plane trees rather than the saplings they had planted in previous phases.

In February 2021, Catalyst say they investigated moving the 3 trees but were unable to do so because the roots were fused in concrete. We are skeptical. Building contractors moved a few paving stones around the trees, but we saw no real attempt by a specialist company to dig around the roots. We want to see a report that states why this work could not be completed.
​
And we still believe Catalyst's new plan, that they have never published or consulted on, to replace our 50 year old plane trees with semi-mature trees is an environmental disaster in one of the most polluted areas of London during a CV19 pandemic. We are campaigning to stop any further unnecessary felling of trees on Wornington Green. 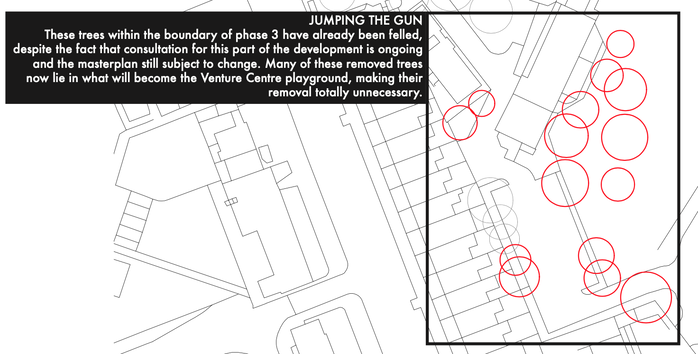